Human Rights, where are they? 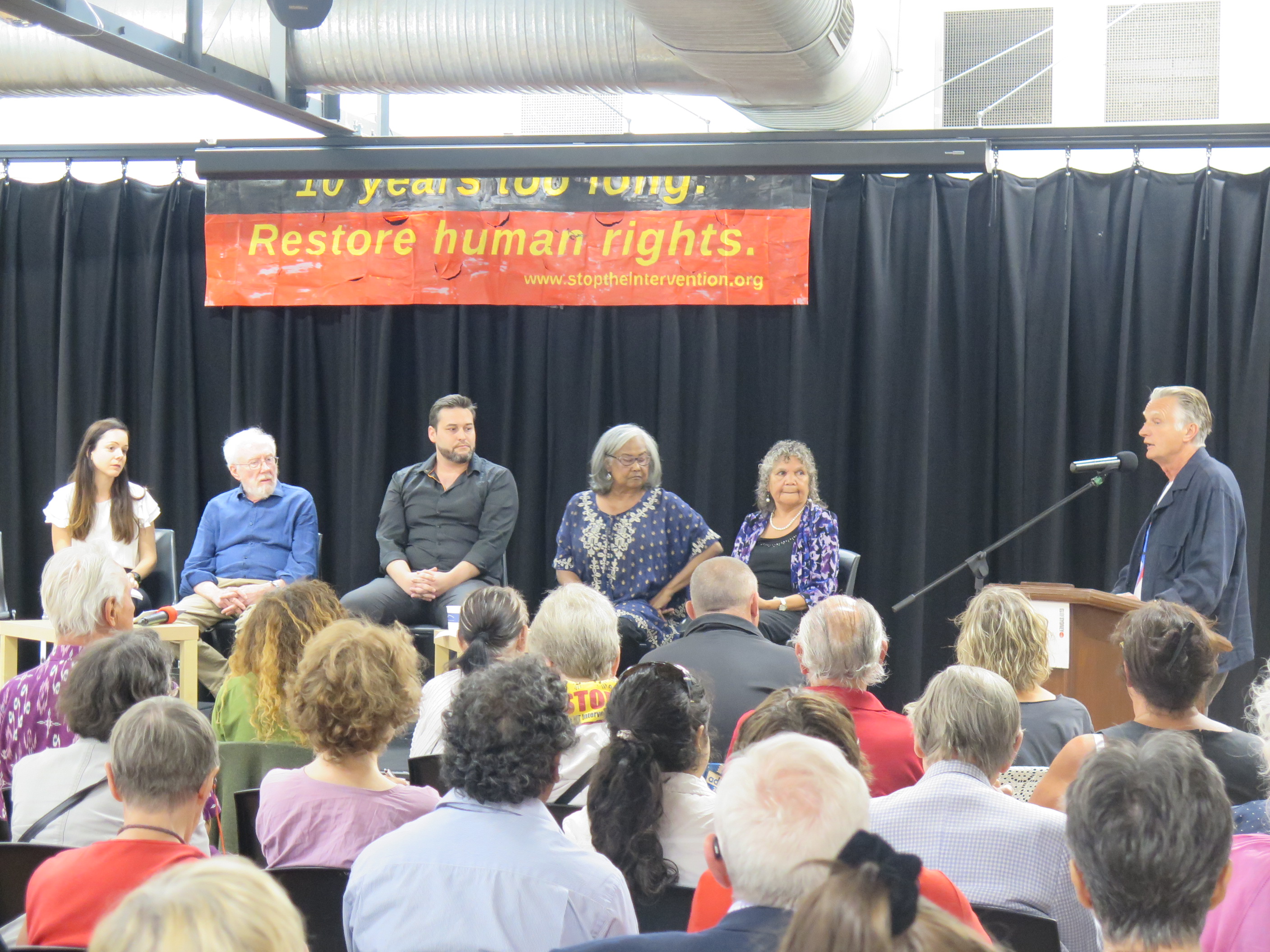 We're still hoping to receive the interviews by Lola Forester with Jeff McMullen on Koori Radio as well as Radio Skidrow's interview with Greg Marks. Stay tuned for updates!

CAAMA Radio - Strong Voices 8-12-2017
...* We hear about a public forum that took place in the Sydney suburb of Redfern today, designed to give attendees a rare opportunity to hear from speakers who have lived under the intervention for the past 10 years. ...
http://caama.com.au/news/2017/strong-voices-8-12-2017

CAAMA - NEWS 8th Dec 2017 - Mparntwe TO speaking up at Sydney Forum against the NT Intervention
Aunty Elaine Kngwarraye Peckham is a TO of Mparntwe Alice Springs and was living on her homelands when the Howard Government imposed the NT Intervention in 2007.
Since it's inception she has been fighting against it through meetings, letters, protests, trips to Canberra, creating Strong Women's groups and putting herself through the courses to educated herself on her own human rights.
She recently travelled to Sydney to speak at the forum entitled Human Rights: Where are they? Ten years of failed Intervention.
She shared her incredible story with CAAMA’s Teghan Hughes...
http://caama.com.au/news/2017/mparntwe-to-speaking-up-at-sydney-forum-against-the-nt-intervention

CAAMA - News 8th Dec 2017 - Deliberate funding cuts to Outstations and Homelands infringe on Human Rights - Interview with International Law expert Greg Marks
Greg Marks, an International human rights law expert, specialising in Indigenous rights..
He is also a policy analyst, researcher and writer, and Centre Associate at the Indigenous Law Centre of the University of NSW.
At a forum being held in Redfern, Sydney this week entitled - Human Rights: Where are they? Ten years of failed Intervention, Greg will be addressing the crowd to highlight the fact that deliberate funding cuts to outstations and homelands infringe on international human rights….
In 2007, the Howard Government imposed the Northern Territory Intervention on thousands of Aboriginal people. In the absence of prior consultation, the Commonwealth imposed income management, seized control of Aboriginal lands and suspended the Racial Discrimination Act.
Mr Marks has had years of experience living and working in the Northern Territory from as far back at the 1970's.
CAAMA's Teghan Hughes caught up with Greg recently to hear what he has to say at the forum...
http://caama.com.au/news/2017/deliberate-funding-cuts-to-outstations-and-homelands-infringe-on-international-human-rights-interview-with-international-law-expert-greg-marks

The Guardian - 8 Dec 2017 - Drop in birth weights and school attendance could be linked to NT welfare restrictions
... Sylvia Purrurle Neale, an Eastern Arrernte woman who spoke at a forum in Redfern on Friday on 10 years under the Intervention, said income management did help people ward off humbugging but had been imposed without consultation and without the option for people to opt out. Of the 15,125 people placed under mandatory income management in the Territory, only 649 – or 3% – were granted an exemption.
“The older people could appreciate how it could work, and I know a few people have said that and I’m sure it’s not uncommon,” says Neale. “But the fact it was dictation – you do it. We’re not stupid people, [the government needs to] bloody learn to negotiate. I know it’s a new thing for Australia.”
... The Intervention is still in place in the Territory. Sparked by a series of news reports alleging child abuse in remote communities, it was approved by federal parliament in July 2007 and required the suspension of the Racial Discrimination Act, because the measures specifically targeted Indigenous communities.
https://www.theguardian.com/australia-news/2017/dec/08/drop-in-birth-weights-and-school-attendance-could-be-linked-to-nt-welfare-restrictions

Tasmanian Times - 4 Dec 2017 - STICS Media Release
Human Rights, where are they? - 10 years of failed NT Intervention
On Friday 8th December in Redfern, Stop the Intervention Collective Sydney (STICS) will host a public forum – Human Rights: Where are they? Ten years of failed Intervention - featuring two strong First Nations voices from the Northern Territory and other speakers from the eastern states.
http://tasmaniantimes.com/index.php?/pr-article/human-rights-where-are-they-10-years-of-failed-nt-intervention/
http://stoptheintervention.org/facts/press-releases/human-rights-where-are-they---10-years-of-failed-nt-intervention-4-12-17 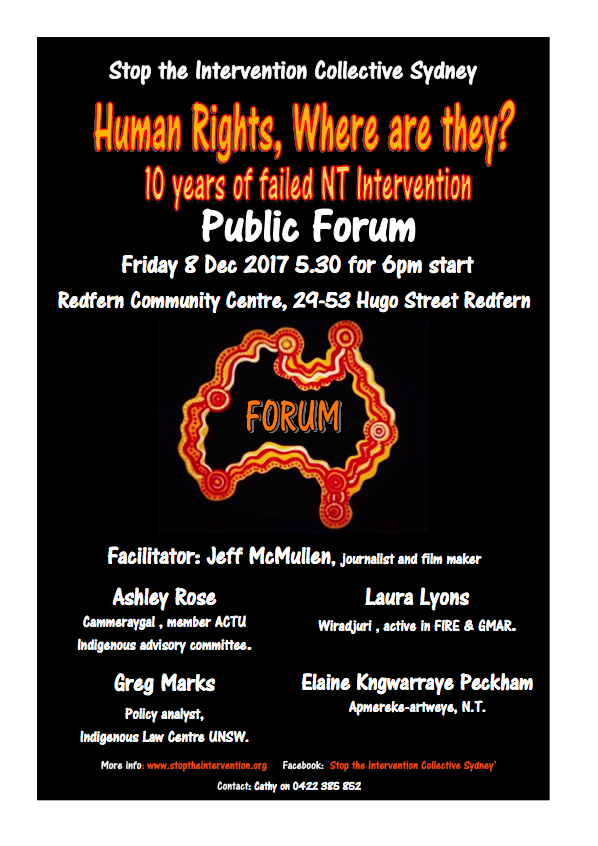 Laura Lyons unfortunately was not able to speak, Thalia Anthony spoke instead.

Human rights: where are they?

It has now been over 10 years since the Racial Discrimination Act was suspended in order to roll out the Northern Territory Intervention.

This so-called ‘Emergency Response’ saw the military sent to remote Aboriginal communities, Aboriginal land compulsorily acquired by the state, dramatically increased policing, the abolition of CDEP jobs and the introduction of welfare quarantining, among many other brutal and paternalistic measures.

Indigenous health expert Pat Turner has described the Intervention as a “complete violation of the human rights of Aboriginal people”.

Now, this punitive policy continues under the guise of ‘Stronger Futures’, and continues to fail First Nations people.

The effects of these measures are only too clear. Rosalie Kunoth-Monks OAM, Arrernte-Alyawarra Elder, describes the Intervention as an abusive assault, done with impunity, on our people. ‘How long,’ she asked, ‘are we – collectively as Australians – going to tolerate this outrage, these unmentionable crimes committed against my people?’

Aboriginal children continue to be removed from their families at an alarming rate, incarceration of Indigenous people has more than doubled, and the rate of suicide for Indigenous people in the Northern Territory has increased sixfold since the commencement of the Intervention.

And yet despite this disastrous failure, we can begin to see the spread of some of these policies to other areas under the guise of Healthy Welfare Card. The Government does not feel any shame in continuing the Intervention and expanding these draconian policies to other underprivileged (especially to high Aboriginal populated) areas in Australia.

So we ask: where are the human rights?