Thanks for coming to the Canberra Convergence. 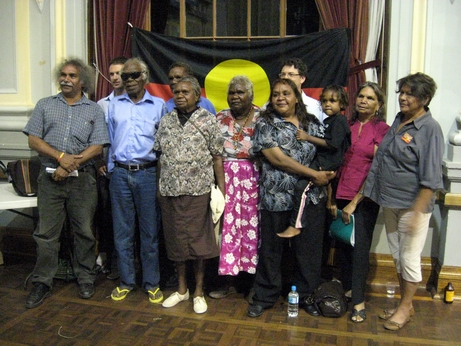 Stop the Intervention Collective Sydney (STICS) was working with other groups (e.g. IRAG http://rollbacktheintervention.wordpress.com/) around the country to organize a protest convergence in Canberra for the opening day of parliament on Tuesday, 3 February 2009. We demand an end to the NT Intervention racist policies and justice for Aboriginal people across Australia.

As part of it, a statement (see our homepage) has been created that calls on the Rudd Government to immediately re-instate the Racial Discrimination Act (1975) and to end the NT Intervention policies which remove basic welfare and human rights for Aboriginal people.

We are seeking support from as many sources as possible. For the latest updates on supporters and other information, please see our homepage.

To support the Canberra protest, for more information, to donate towards funds urgently needed for the organization of the Canberra convergence, or to book a seat on a bus to Canberra, please e-mail: [email protected] or call 0401 165 431.

We strongly encourage you and/or representatives of your organization to go to Canberra on the 3rd of February to show your support.

For further information you may wish to consult the following websites:

http://stoptheintervention.org/ - for updates and info on the Canberra convergence and the film screening at the Teachers Federation, 23 Mary Street, Surry Hills on Monday, 19 January 2009 at 6 pm.

http://stoptheintervention.org/facts/press-releases/peace-walk-condemns-toxic-intervention - Media Release regarding the Peace Walk from Sydney to Canberra from STICS by Liv Nigro

http://stoptheintervention.org/facts/press-releases/nt-communities-protest-opening-parliament-09 - Media Release on the Canberra Convergence from IRAG by Paddy Gibson

http://news.smh.com.au/national/aborigines-to-converge-on-act-in-protest-20090113-7fyc.html - Aborigines to converge on ACT in protest, SMH article 13-1-09