You are here: Home » 10 Years of Intervention

"10 years since the Federal Government Intervention and everyone needs to remember that we experience the failings of that invasion every day."

- Events to commiserate about the

Speakers from the Northern Territory

For the leaflet double-sided for printing: please click here 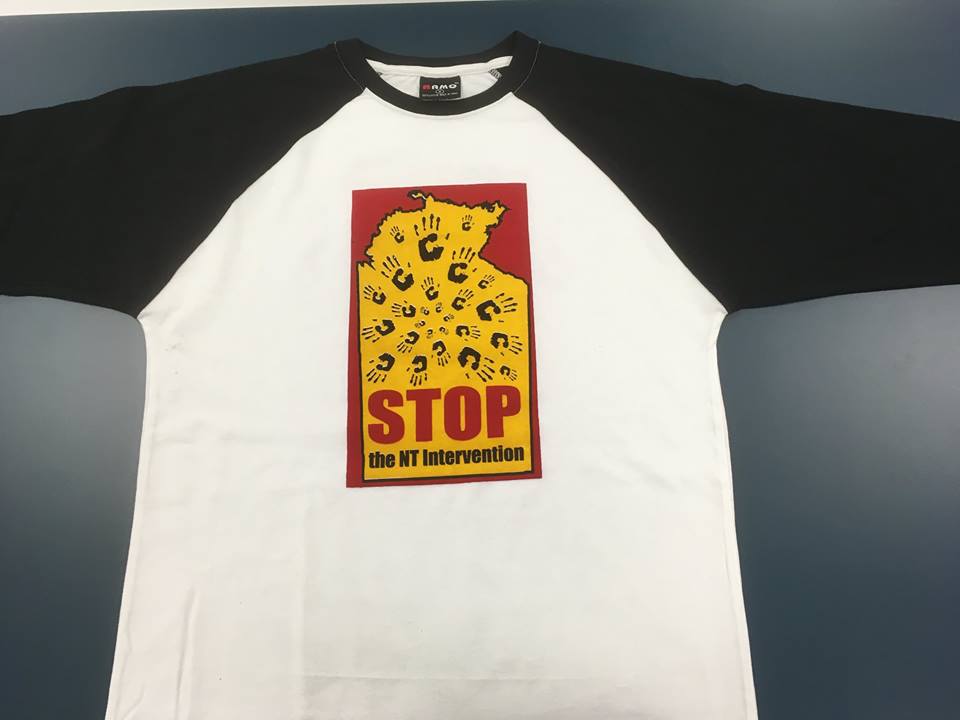 The sudden and brutal upheaval of Aboriginal people’s lives in the Northern Territory in June 2007 by the Howard Government called the “Intervention” & its extension in 2012 by the Gillard Government for 10 years the so-called “Stronger Futures” has caused widespread havoc and distress.

The statistics tell us that:

• Child removals have increased; children are not safer.
• Housing is still overcrowded and in an appalling state
• Indigenous incarceration rates are increasing rapidly
• Suicide and self-harm incidents have increased
• The gap has not closed
• Violence is a continuous threat
• Poverty, trauma and despair is ongoing
• 99-year leases are just a Land grab

Let’s use our Collective voice to finally help

The Northern Territory Intervention, launched by John Howard in June 2007, was the biggest attack on Aboriginal rights in many generations. The Australian Army was sent into Aboriginal communities and the Racial Discrimination Act was suspended to push through a host of draconian measures to allow the Commonwealth to take control of Aboriginal people and their lands.

A decade later, the Intervention has disappeared from public debate, but Aboriginal communities continue to deal with severe breaches of their human rights. Many of the measures remain in place, extended until at least 2022 under ‘Stronger Futures’ legislation. Conditions in communities have deteriorated, with many social indicators such as rates of incarceration, child removal, attempted suicide and school attendance going backwards. Intervention policies such as the quarantining of welfare payments and withdrawal of resources from remote Aboriginal communities have spread out across Australia.

This forum offers a unique opportunity to hear directly from Aboriginal women from the Northern Territory about their experiences of life under the Intervention, their struggles against injustice and their vision for a positive future.

The panel will be hosted by Prof. Larissa Behrendt, Chair of Indigenous Research at UTS and Director of Research at the Jumbunna Indigenous House of Learning, UTS.

Speakers include:
Pat Turner - An Arrente woman with many years experience campaigning for Aboriginal rights and working as a senior public servant, including as Deputy CEO of Centrelink and CEO of the Aboriginal and Torres Strait Islander Commission. Pat is currently the CEO of the National Aboriginal Community Controlled Heath Organisation.

Nancy McDinny - A Garrwa and Yanyuwa woman living on her homelands near the Borroloola community in the Gulf country. Nancy is an artist, linguist, Elder and community leader who has campaigned strongly against mining developments on her lands.

Kylie Sambo - A Warlmanpa and Warumungu woman living in Tennant Creek, Kylie was 14 years old when the intervention was launched and has consistently spoken out about the negative impacts on Aboriginal youth. Kylie is a hip hop artist and played a leading role in the fight to protect her traditional lands at Muckaty from a nuclear waste dump.

“Politics In The Pub”

A Widening Gap: The Intervention, 10 Years On
...This is the second in a series of exhibitions that witness and discuss The Intervention and Australia’s ongoing human rights abuse. The first exhibition Ghost Citizens: Witnessing the Intervention, was presented in 2012 to coincide with the Sydney Biennale and shown in Sydney (XAP), Project Contemporary Artspace Wollongong, Counihan Gallery, Melbourne and NCCA, Darwin. ... Some of the original artists have been joined by a growing band of artist activists.
Co-curators: Jo Holder and Djon Mundine OAM
http://www.crossart.com.au/next

Events in other cities:


24-26 June 2017
10 years ago on June 21 2007 the NTER (Northern Territory Emergency Response, aka the Intervention) was announced...
There will be a convergence from June 24 -26 2017 in Alice Springs. Barbara Shaw is calling out to people to come together to talk about it all, and work together to come up with ways to overcome these problems. We want to talk about all the issues, such as youth (in)justice and children being taken from their families. ...

You can see Barb’s call out at https://youtu.be/0mDHM5WapEA

For the programme of events, more info about the Intervention, its measures and effects:
https://rollbacktheintervention.wordpress.com/10-years-of-the-intervention/

Introduction: Jon Altman, research professor in anthropology at the Alfred Deakin Institute for Citizenship and Globalisation at Deakin University

In 2007 under the Howard Government Aboriginal peoples’ lives in the Northern Territory were suddenly and brutally traumatized. Labeled the ‘Northern Territory Emergency Response’ or ‘NT Intervention’ the policy was later expanded in 2012 by the Gillard Government for ten years and rebranded as ‘Stronger Futures’. These imposed Government policies have caused widespread havoc and disempowerment amongst First Peoples’ communities in the NT, breached human rights and United Nations guidelines, and were not consented to.

The policies are failing. Aboriginal land rights have been weakened and the Gaps are widening.

The people have long called for this LEGISLATION TO BE SCRAPPED.
The sovereignty of the clans and First Nations Peoples must be recognised and respected.
There has been a resounding call for substantive reform and PATHWAY TO TREATY/IES.

For videos and audio from the event please click here

'And there'll be NO dancing'


Book description:
... Fourteen essays by scholars from Australia and Germany examine (historical) contexts and discourses of the Intervention and subsequent policies impacting Indigenous Australia since 2007 from the perspective of diverse academic disciplines including history, sociology, law, Indigenous studies, art history, literature, education and media studies. They invite readers to engage in the debate about human rights, about Indigenous self-determination, and about the preservation of Indigenous culture.